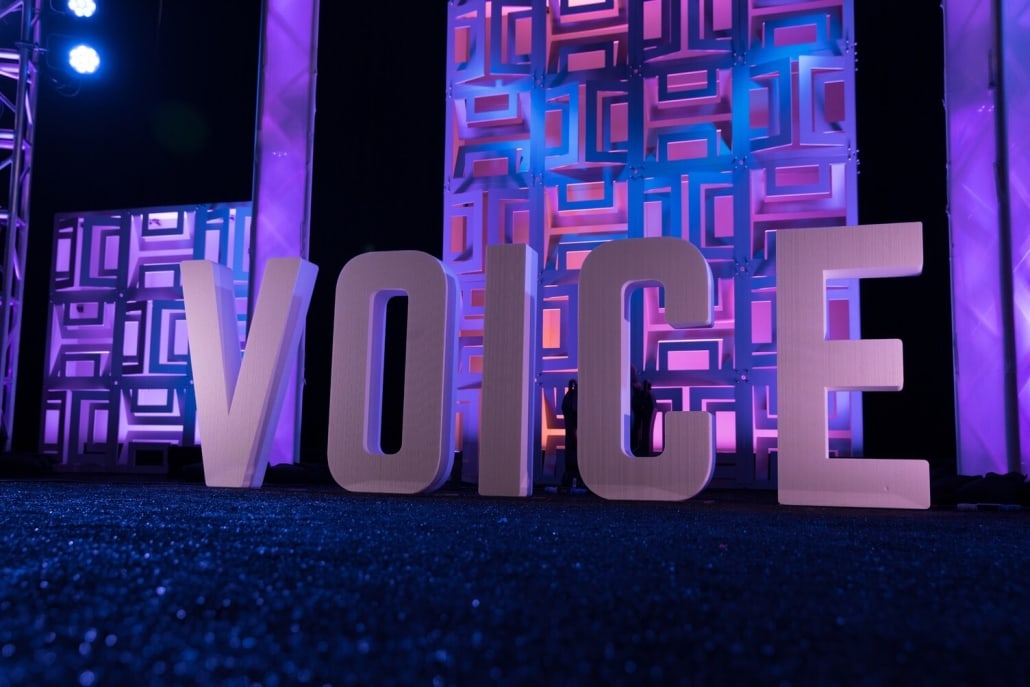 The VOICE Summit is drawing thousands to the NJIT campus in Newark this week. Photo courtesy of NJIT

More than 2,400 people flocked to the New Jersey Institute of Technology in Newark Tuesday to attend the first installment of the three-day VOICE Summit, an international exposition featuring lectures, panel discussions, and hands-on training in so-called “voice first” technologies.

The crowd included industry pioneers, such as David Isbitski, an NJIT alum and “chief evangelist” of Amazon’s best-selling Alexa smart speaker. The event also drew front-line software developers, emissaries either self-assigned or dispatched from a host of consumer businesses, and students, anxious to dive in to what is being touted as the next technological wave.

Industry leaders made it clear they were present to talk about the future.

“We believe ‘voice’ represents the next major disruption in computing,” said Isbitski, who first started imagining improving the dynamic between humans and the digiverse as an undergraduate more than two decades ago in a class at NJIT called “Computers and Society.”

Change brought by voice first technologies is coming fast, he noted. It is only a matter of time, he said, before humans’ voice interactions with computers will predominate as the primary mode of interaction with the digital world. On his company’s recent Prime Day in which customers paying an annual fee received discounts, Amazon’s miniature smart speaker, Echo Dot, was a bestseller. “This truly is that generation where human beings are going to be interacting with AI every day,” he added.

A representative from Panasonic, another major event sponsor, confirmed in an opening address that his company, known for its electronics capabilities, was also betting on voice first.  “We believe voice is the future,” said Tavis Szeto, director of mobility and tech for Panasonic Industrial Devices Sales Company of America. “It’s the most effective tool we use as humans.” The company’s North American headquarters are located in Newark.

NJIT in Newark was selected as the event site over rival bids in major cities because it offered an academic setting over a traditional convention center, according to NJIT’s President, Joel Bloom. He couldn’t seem to stop smiling as he took in the streams of attendees wending their way through the University’s colossal new $102 million Wellness Events Center, the heart of the conference, and on walkways throughout campus. 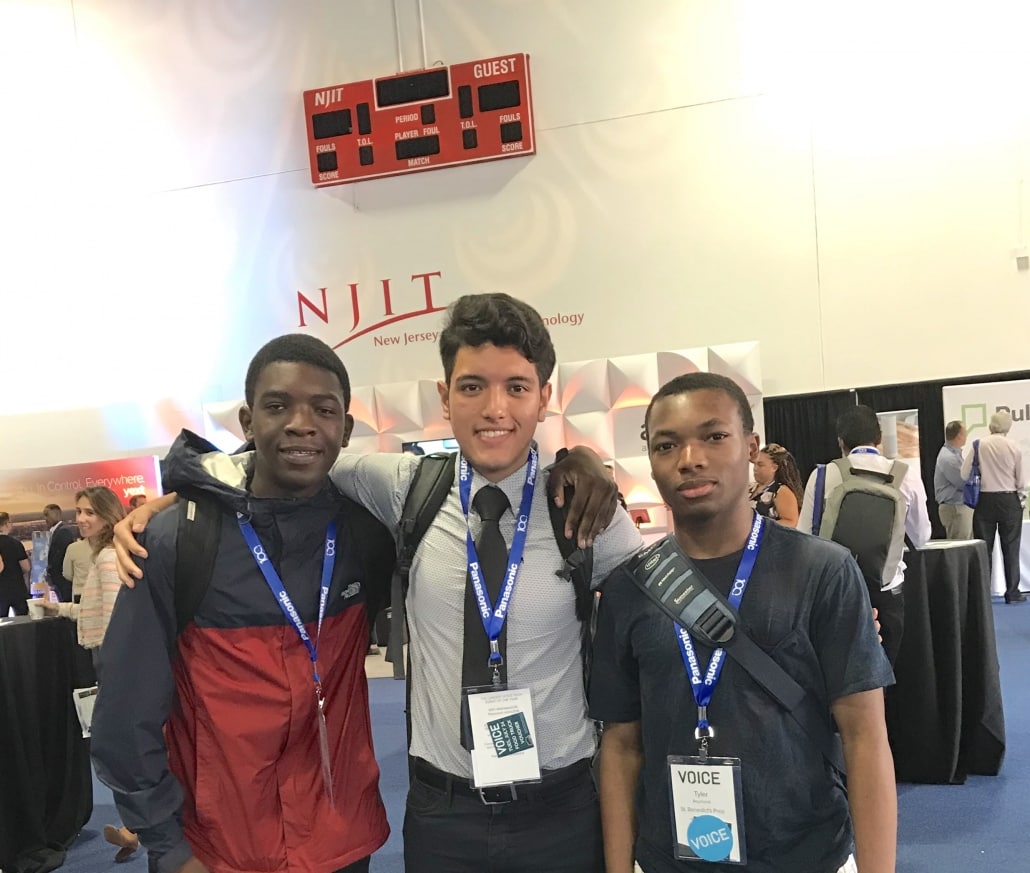 Students from St. Benedict’s Preparatory School in Newark are among many students attending the VOICE Summit to learn about voice first technology. (From left) Khris St. Louis, Bryan Pina, and Tyler Raymond. Photo by Kitta MacPherson

Elated was the word that best described Bloom’s feelings, he said.  “We have been a transformative educational institution since 1881, and this event brings a transformative technology to our campus,” said Bloom, who will address the conference in a keynote speech this morning.

Daniel Sullivan, an events and outreach coordinator for the NJ Tech Council, took pride in the size of the crowd, scanning it at an early-morning networking breakfast. Nearly 1,000 more people signed on than originally expected, organizers said.

“Ambition (for Newark and New Jersey) is at an all-time high,” said Sullivan, whose organization was involved in organizing sponsorships for the event. “Major players are working together to make it a destination for companies.”

People attended to learn more about the value of the voice first approach. Roy DeYoung, a brand and digital strategist for iMedia in Boonton, said his agency is leery of jumping on tech bandwagons and assesses emerging innovations before recommending them to clients. With voice first, he said, he “wants to know whether it makes sense in the user journey.” 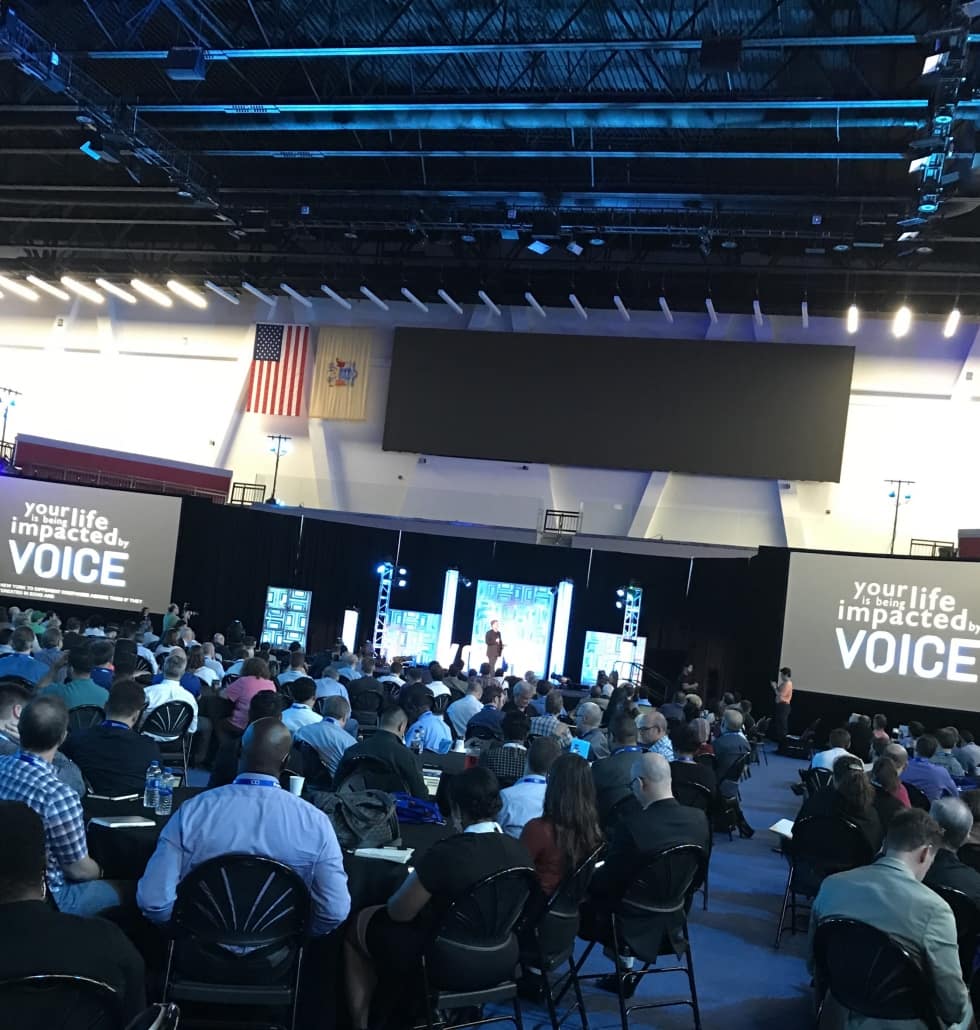 Industry leaders at a conference at NJIT say voice represents the next major disruption in computing. Photo by Kitta MacPherson

Part of his inquiry, he said, stems from studies showing that most Facebook users do not listen to sound when they watch videos, underscoring the fact that society is still highly visual. However, with the growing popularity of voice-directed products, he wants to better understand the motivations of consumers opting to navigate the digital world with voice commands. “I’m here to find the ‘why?’” he said.

Students, from area high schools and colleges, showed up to immerse themselves in the technology and the programming and business culture. Khris St. Louis, a rising senior at St. Benedict’s Preparatory School in Newark who attended the event, said he wants to study engineering and hopes to obtain a job locally in the city’s burgeoning tech sector. “Newark is such a hot spot,” St. Louis said. “I’ve been reading about how many companies are locating here. If voice is a growing technology, it’s important to know about it.”

St. Louis was accompanied by a few friends, Tyler Raymond and Bryan Pina, who just graduated St. Benedict’s and will be entering NJIT in the fall. Raymond, who wants to pursue computer science, said he would be attending a hands-on session to learn how to program Alexa for his mother. She’s been having trouble using the product since she purchased it. Pina, who will be studying civil engineering, said he hoped to meet future employers while attending sessions.

Both leaders and attendees said the meeting helped burnish Newark’s reputation as a center of commerce.

U.S. Sen. Cory Booker, a former Newark mayor whose office is in Newark, also noted the significance of Newark’s role in hosting the event. “I am excited and hopeful,” Booker said in a statement, “that this summit will showcase the robust reserve of talent and unparalleled tech infrastructure that Newark has to offer.”

Lords of the Underground will perform at Symphony Hall this Sunday, July 29
Scroll to top