How 47 students from a Newark high school got themselves heard on the floor of the U.S. Congress 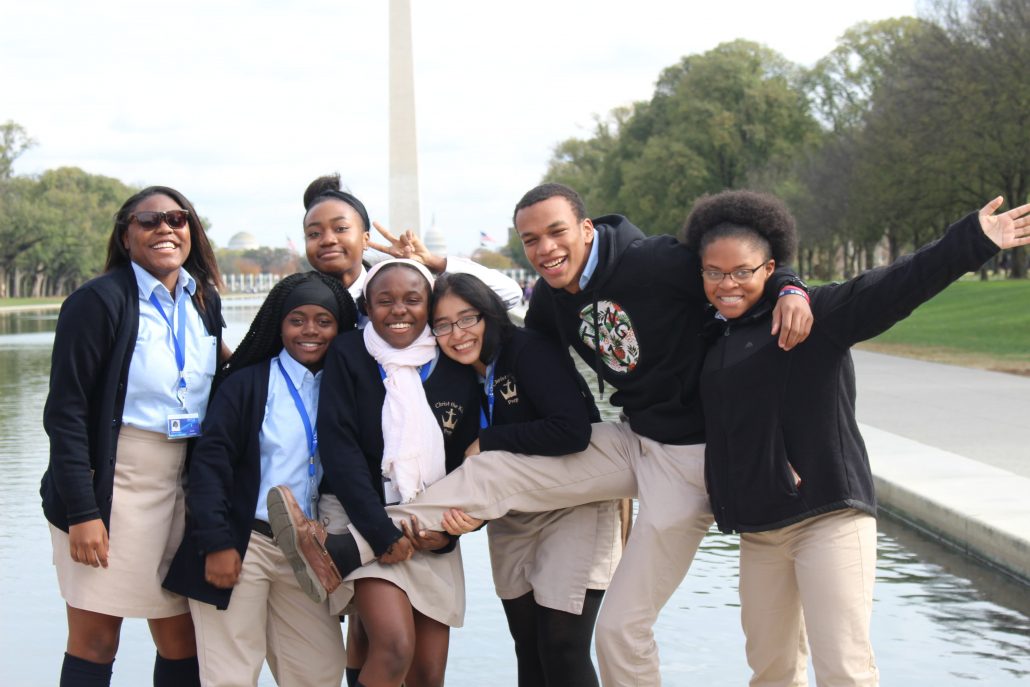 Cristo Rey Newark High Schools visited Washington, D.C. on November 14, 2017 to speak with their Congressional representatives face-to-face about the uniquely damaging effects of a provision in the tax overhaul bill on their school’s students and families. Here, the students took a break from their advocacy to pose for a photograph on the National Mall. Image courtesy Melissa Honohan

It all started when Melissa Honohan, Vice President of Corporate Work-Study for Newark’s Cristo Rey Newark High School, realized that a provision in a draft of the U.S. House of Representatives’ version of their tax overhaul bill could be uniquely devastating for the school’s students and their families.

When the House Republicans released their draft of the tax bill in early November, analysts found one provision that would essentially tax graduate student tuition waivers as income, even though the money never touched their bank accounts.

The provision, which has since been discarded from the compromise bill the House negotiated with the U.S. Senate, caused an uproar among often cash-strapped graduate students and their advocates.

But it also caused alarm for Honohan. The same provision threatened Cristo Rey’s unique work-study model for its high school students. If passed, it could have triggered harsh economic consequences for the students and their families.

Honohan and her school colleagues turned the scenario into an opportunity to give the students real-life experience lobbying their elected representatives.

Christo Rey’s work-study model helps students and their families defray the cost of the private school’s tuition. The corporate roles are also intended to offer the students work experience that can expose them to career paths, build their networks, and help them learn soft skills that might give them an edge when applying for college.

The high school, which serves mostly Newark students and a few from surrounding municipalities, is one of 32 schools in the Cristo Rey network. Approximately 11,600 students from low-income families are enrolled in Christo Rey schools across the nation. Students complete their academic classes four extended days a week, and then work onsite at paid corporate internships one day per week.

The program offsets the school’s cost per student, which is $12,835 per year, by up to $5,250. Their earnings are applied directly to tuition costs. (According to the school’s website, the balance is covered with funds raised from the school’s development team, a family contribution of $270 per month or less, and additional scholarships and aid.)

Under Section 127(a) of the current tax code, Cristo Rey students’ earnings are treated as tax-free tuition assistance. If that section had been repealed, as the House tax bill proposed, the students’ work-study earnings would have been counted toward their family income.

“It could have a horrible cascade effect on the family,” said Honohan, who is responsible for building partnerships with businesses that employ the students. “They could lose public assistance, food stamps, and it could affect students’ opportunities for college [financial] support and assistance.” 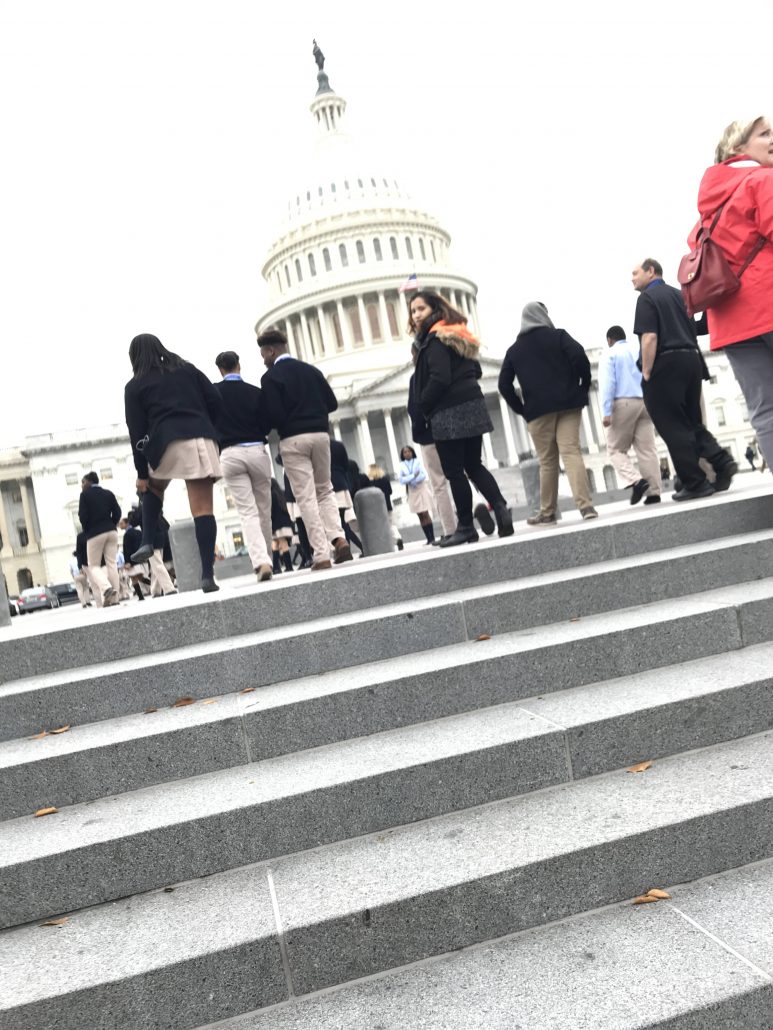 In response, the school launched a letter writing and calling campaign. But Honohan, who spent years working in the non-profit world in Washington, D.C., thought the students could have a greater impact if they lobbied for their cause in person. “I was like, ‘If you let me take a couple of students to Washington, they could tell their story, and it could mean more than a thousand letters,’” said Honohan.

With the support of the school’s president, “a couple of students” turned into a busload of 47 high schoolers from the freshman through senior classes. Honohan worked on securing meetings with Congressional staff from the offices of Representatives Donald Payne, Albio Sires and Rodney Frelinghuysen, and Senators Cory Booker and Robert Menendez.

They kicked off the day with an early morning pep talk from North Ward councilman Anibal Ramos before embarking on the four-hour chartered bus trip. The students’ lobbying power would reside with their stories, said Honohan, so she gave them a crash course on how to use their words to greatest effect right on the bus.

“For four hours I did Advocacy 101,” she said. Honohan told them how government worked, explained the steps the bill would need to take before becoming law, and coached them on how to deliver an effective message in a short period of time.

The students took turns practicing in front of their peers with the microphones on the bus. “It was amazing to see them refine their message,” said Honohan.

On the ground in Washington

Once in Washington, the students kicked off their advocacy tour by meeting with staff at Booker’s and Mendendez’s offices. Honohan said both staffs invited the students inside for tours and listened intently to their stories.

Following those meetings, while most of the students took a Capitol tour, Honohan took four of the students to visit the office of Republican Congressman Frelinghuysen, the representative for their Congressional district. “I only took his constituents, and I had to explain that it would be unlike the other meetings,” where the students had discussed the bill with the staffs of lawmakers who were on the same side of the issue as they were.

“It was wonderful to have four black young women sharing their stories in his office,” said Honohan. The staff member was welcoming and polite, she said, offering the girls a tour of Frelinghuysen’s office and posing for a photograph.

On the question of the amendment, he was “noncommittal,” said Honohan.

(Frelinghuysen ultimately voted against the bill after being cleared by party leaders to do so. House Republicans had enough support to pass the bill without his vote.)

The same four students also visited the offices of Bonnie Watson-Coleman, who was the first black woman to represent New Jersey in the Congress, and is the co-chair of the Congressional Caucus on Black Women and Girls.

Payne takes the students’ message to the House floor

The most consequential meeting of the day was the last, when all of the students piled into Congressman Donald Payne’s office. As they had with the previous lawmakers, the students shared their stories about the negative consequences of the tuition waiver provision. Payne told the students that they had his full support.

“He was so with them. Listening and so engaged,” said Honohan.

Payne then arranged for the students to take a photograph on the steps of the Capitol building with the House of Representatives’ official photographer. After the photo session, he told the students that because of their effective advocacy, he would take their message directly to the House floor.

Payne kept his word. He delivered a one-and-a-half minute floor speech the next week, during which he described how the provision would affect the students and the school. During the speech, he credited the students for their advocacy and described the effect that the tuition waiver change would have on the students.

“They worked hard and got accepted into an innovative school,” said Payne, touting the 100 percent four-year college acceptance rate of the most recent graduating class. “But under the GOP tax scam, these bright young people from financially disadvantaged families will have to pay taxes on their work-study earnings. Taxes they cannot afford. That is wrong.”

“It was really, very powerful for us at the school and for the students to know that their voice matters,” said Honohan.

She continued: “I feel like they took this big risk, and he was wonderful in doing that. The thing that makes my heart sing is that the students walked in there [and now they know that] their voice could be heard and it’s important.”

As of this writing, it looks like this particular threat to the school’s model is now off the table. (“[O]ur school and the Cristo Rey Network are very relieved,” Honohan wrote in a follow-up email. [We’re s]o proud of the students who worked hard and who made their voices heard.”) But the effect of the trip was apparent immediately afterwards in terms of what it taught students about taking action, and how to tactically amplify their voices.

“I was sitting with a young freshman girl [after the trip] and I said, ‘Hey, you know what happened last night? He spoke about it on the floor,’” said Honohan. When she showed the student the video, the student started to cry.

At Home in Newark: Stories from the Queer Newark Oral History Project opens...