Chaos & Candy at The Comedy of (Jersey) Errors

Adapted and directed by Rachel Evans at Kean University 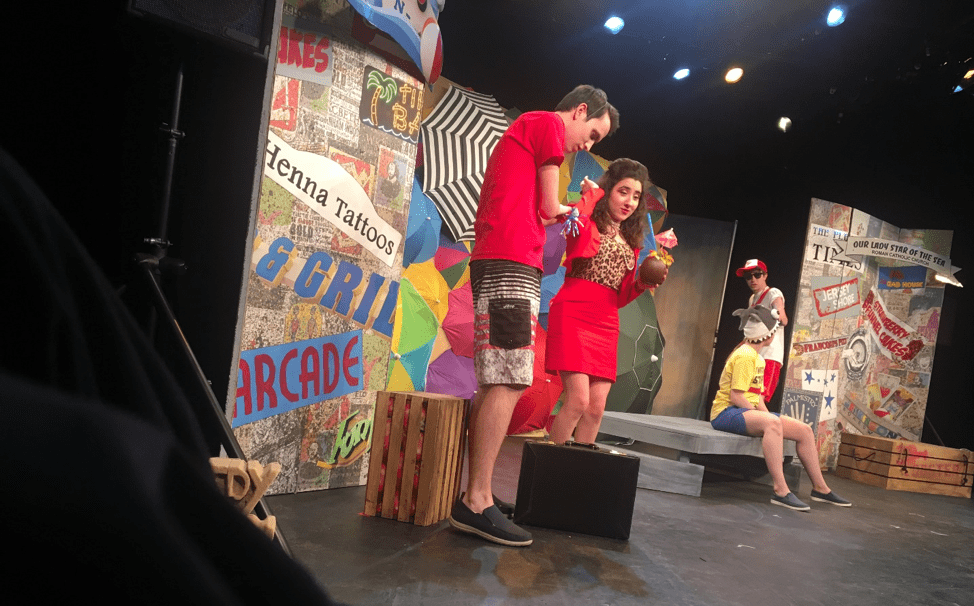 Rachel Evans, an Assistant Professor at Kean University, wrote and directed The Comedy of (Jersey) Errors, which is adapted from William Shakespeare’s The Comedy of Errors. Photo: Rachel Wagner

When I saw that the Theatre Conservatory at Kean University was staging a mash-up of William Shakespeare’sThe Comedy of Errors and the Jersey Shore, I thought it was going to be a take on Jersey Shore, the television show. The show’s reboot started airing earlier this month. Now would be the perfect time to satirize it.

My son and arrived at the Zella Fry Theatre on Kean’s campus in Union a few minutes late and had to wait to go in. During a quick stage change, we finally took our seats only to see two characters on stage dressed like… losers. They were wearing crocs and lifeguard outfits.

That’s when I realized, this isn’t Jersey Shore the show. It’s the Jersey Shore–the beach. Instead of Ephesus, where Shakespeare’s original play takes place, this play was set in Point Pleasant.

My misunderstanding was of a piece with Shakespeare’s The Comedy of Errors because the play is all about mix-ups. Two sets of twin brothers spend the play searching for their other half. In Rachel Evans’s version, The Comedy of (Jersey) Errors, the sets of twins are dressed as two lifeguards and their sidekicks, two guys wearing “I’m with stupid” shirts. The four of them are in the same town together, but never the same room. Their mistaken identities set off a number of zany misunderstandings and comedic errors, until everyone unites at the end.

The Jersey Shore in this play was not totally familiar to me, but I guessed that it was more realistic than the MTV show’s depiction. The staging depicted both the beach and the boardwalk as centerpieces of the shore experience, whereas the show was more of a boardwalk affair. Colorful umbrellas covered the back wall flanked by ads for henna tattoos, an arcade, pizza and the like.

My son wanted to play with a beach ball prop.

The script incorporated very literal New Jersey references. “For Sinatra’s sake” was uttered a couple of times. One character was also “as mad as Chris Christie” at one point. The phrases were corny, but they worked. Peppering them in with Shakespearean English made all the dialogue seem more theatrical, which was cool.

The music had a similar effect. Contemporary music, like a song by 21 Savage, lived alongside more traditional Italian tunes during stage changes. Old and new flows coexisted in one performance, much like they do at Seaside Heights. 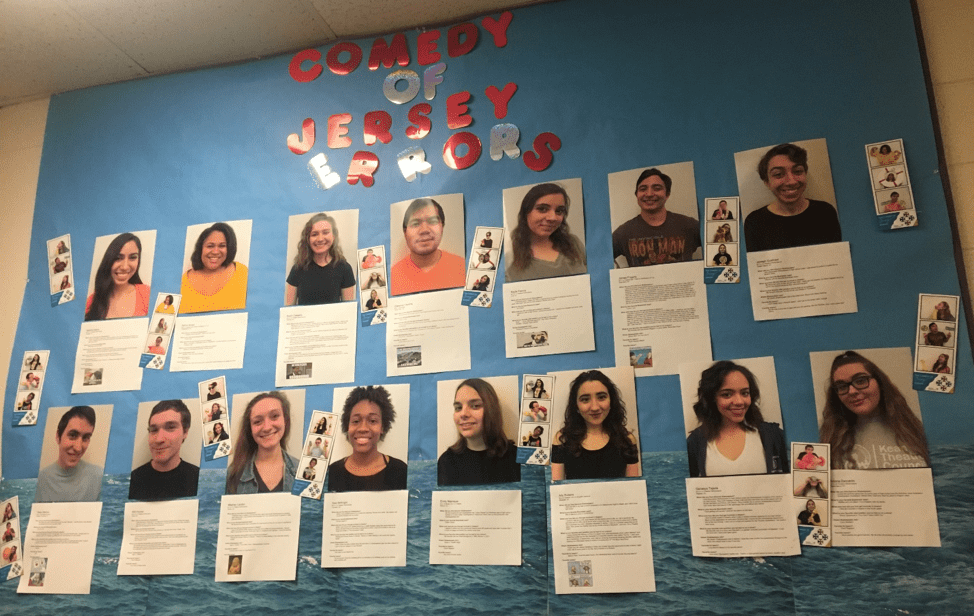 The players. Photo by Rachel Wagner

Violence and money were important themes. The boardwalk’s world of money—constant consumption of bodies, food, and novelties—made for complex exchanges of control. The character Angela, a jeweler (played by Arly Rubens), debuted in a scene where she stole money from an old lady that she seemed to be helping. Later, Angela unknowingly gave the wrong sidekick twin an embezzled New Jersey-shaped chain (the audience liked that), which eventually leads to him taking a beatdown (my son liked that).

It was actually around that time when my son realized he could get out of his seat. He almost ran right onto the set, which would have been easy because our seats were set-level. Eventually one of the sidekick twins tossed saltwater taffy as he ran backstage. My son turned around towards me to grab a piece off the floor. When he saw the candy tear apart in strands, he didn’t want it anymore. His attention returned to the possibility of running onstage.

So we stepped out into the hallway. I was bored enough out there to eat the candy even though it had slightly hardened edges and was watermelon flavored–it was legitimate Jenkinson’s saltwater taffy.

That was the first time my son and I had to walk out of a performance. It was a short play, which can be a good thing for actors and audience alike. But it also made it so we couldn’t stay in the hallway for long because the play might end any minute. When we returned to our seats, there was water everywhere. My son simply would not sit still. I couldn’t even process what was on stage because my attention was focused on keeping his body near mine. On stage, people were yelling, a priest was sermonizing to the group, and water guns being were sprayed.

The last line of the play, spoken by one of the Dromio brothers (sidekicks in Evans’s version), was “We came into the world like brother and brother; and now let’s go hand in hand, not one before another.” My son and I didn’t get to see this wholesome visual onstage, but the dialogue nonetheless described how my son and I walked back to the car.